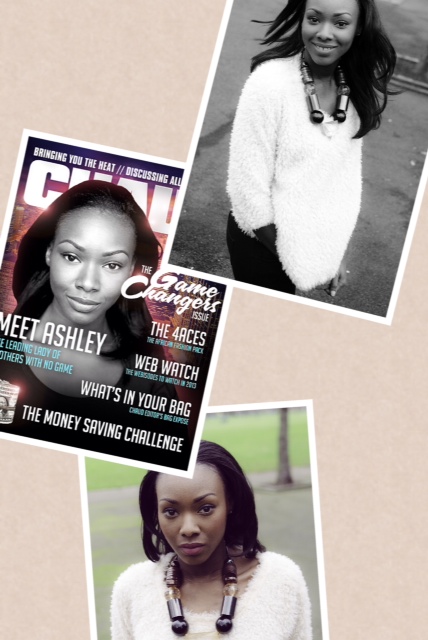 Our cover girl for this issue is the beautiful, lovely and talented actress Ashley Bannerman. How might you know Ashley? Well she plays  Remy in the web show Brothers With No Game.  We enjoyed interviewing Ashley and we say grab yourself a cuppa and enjoy finding out more yourself by reading this article!

I had always loved theatre and acting at school/college but I did a degree in Psychology and worked within that profession after I graduated from university. I even applied to do my clinical doctorate and got an interview for one of the best courses in the country but did not get a place. I remember being devastated but it was that setback that made me realise that I missed acting so much. I remember being at work one day and just not feeling completely fulfilled. I started sending emails to a few of my friends that I knew were actors and asked about how I could get back into the acting scene. One of my friends told me about Identity Drama School (which run training classes for working/aspiring actors) and I have been there ever since. At first I was doing it for a bit of fun but when they signed me to their agency, I thought ‘wow I could actually really do this’? Not getting on to that course was the wake up call I needed and I haven’t looked back since. I have to say I am in a much happier place now.

My first professional role was playing Sheila Asike in BBC’s Casualty for 2 episodes. I was acting alongside veterans like Michael Obiora (playing my brother – series regular Lloyd Asike) and Ellen Thomas (playing my mother) so I remember being really nervous, but they were both so lovely and welcoming.  I played quite a feisty character who was very community orientated and campaigning about a man, who had been killed by the police. The story was quite similar to that of the London riots.

I do like playing a strong woman. There really are not enough roles out there like this in the UK for black woman. However I think with the U.S beginning to pick up on this and casting actresses like Kerry Washington as the lead in shows like Scandal, we are beginning to realise gone are the days of black woman playing ‘nurses’ or ‘junkies’ we can be ‘leading ladies’ in mainstream dramas too! It’s a beautiful thing.

The writers approached me with the character. Hmmm, I can’t think of why? Lol. But I read the script and thought it was both hilarious and poignant. It really covered a range of real life issues that I knew both men and woman across the board could relate to. I chose the role because women like Remy exist. She is neither good nor bad but I think there is a fine line between having high standards and just being rude. If your situation can match that you seek of others then you are well within your rights to aim high. But women shouldn’t expect a man to pull out all the stops if in essence they wouldn’t do the same.  In a way it served Remy right to pay because if she wasn’t willing to fork out money on a lavish meal she certainly shouldnt have expected Junior to either.

Originally, Remy was only to appear as a one-off in the ‘Recession Dating’ episode but the writers decided they could really see a future for Junior and Remy and so the rest is history! Really grateful to be part of something so special!

Oh dear this is the moment you ask yourself, should I answer this question honestly or lie lol! Id say I relate to Remy in the sense that she is a woman that knows what she wants in life but I don’t relate to her behaviour or the way she went about that date. I mean I would never smack money out of a guy’s hand looool! On a serious note going to Nandos or getting on a bus for a 1st date isn’t a big issue. I think it would be courteous for a guy to let a girl know that in advance, you wouldn’t want to whip out THAT dress and 5 inch heels to be stumbling on to the number 59 bus if you know what I mean lol

My biggest 1st date disaster was being stood up….yep sad times, we will say no more about that, other than it worked out well in the end.

Thank you. We speak about the scenes and where we think the characters are and I think that helps us find a real connection on screen. Issac Sosanya is a lovely guy who is a pleasure to work with, so I think that the ease probably comes across on camera, it helps to trust your fellow actor.

I was really overwhelmed to see all the lovely comments and messages people sent/posted. I knew that the show would be popular because it is so well written but I had no idea how much the audience would love Junior and Remy as a couple. They have really invested in them and its great that they are so well received.

Absolutely! But I only do blue lillies! Obviously im kidding and  that comment was all in jest, we have great banter on set which is important when you are doing comedy.Plus there really is no time to be a diva when we are all working so hard.

I could tell you but I may have to kill you…. Seriously. (Editor: Our Brother With No Game fam just won’t share this information!We are resorting to bribery for this info The Yack will tell us if we bribe him LOL )

My dream role would be playing a female Sherlock absolutely love watching Benedict Cumberbatch on the BBC show , he does  a great job and I respect his work. I’d love to play intelligent leading roles for woman because we kick butt too! Love shows like Scandal, Suits, Law and Order etc. Anything which would involve playing an intelligent professional woman.

I have to say it’s a topic that saddens me somewhat . I was speaking to a few of my friends who are also black actresses and we were saying how sad it is that when we are asked about Black British Actress we struggle to find people we identify with and say ‘yes I want a career like yours’ , you really inspire me. And that’s not to say there are not a mass of talented Black actresses out there. Naomie Harris and Sophie Okonedo are to name but a few. But I think having a lack of Black woman in leading roles creates a bit of a glass ceiling effect. However I am one to believe that you must have faith that you are a game changer. Adelayo Adedayo (another Identity Drama School student) recently playing the lead in BBC ‘Some Girls’ has proven we are making progress.  I have always believed the sky is the limit, who is to say you cant have the career you want?

The only way I could answer that is by saying I want to be a successful working actress and if that means going to Hollywood to achieve that, I’m all for it. Sadly the rate the UK industry is moving it means we are losing lots of our Black British talent to the States which is a real shame but I don’t think there is anything like getting recognition from your home and so it would be nice to gain that success here.

Hopefully great things! We are filming season 2 of BWNG which should be released spring /summer 2013.  I have been in touch with some great casting directors for some brilliant projects, so stay tuned!

Know the type of actress you want to be and stay true to that. There is space for you and if there is not, make one. Be innovative and create your own work, the internet and webseries have given us the opportunity to create the type of roles we want for ourselves. Read, research, train and play, acting is fun – don’t ever lose that. And finally Believe! You can do it!